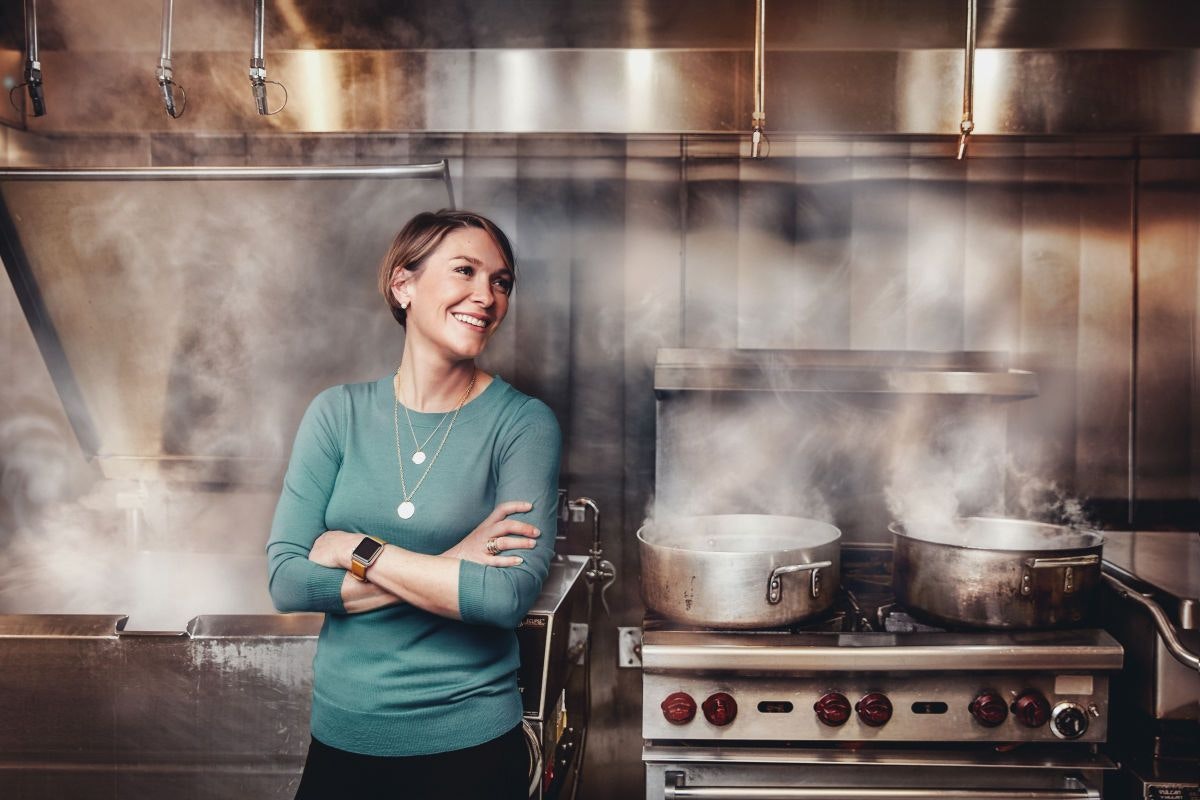 Most of us would feel proud to accomplish just one of the highlights on Angela Dunleavy-Stowell’s resume. As the former CEO and cofounder of Ethan Stowell Restaurants, a business she started with her then husband, Angela is in part responsible for gifting Seattle with such gems as Tavolata, How To Cook A Wolf, and Anchovies & Olives. She serves on multiple boards across King County, including United Way of King County, Seattle-King County Workforce Development Council, Seattle Metropolitan Chamber of Commerce, and the Downtown Seattle Association, fighting the good fight for living wages and workers rights. She’s also a mother of two. There’s really only one word for someone juggling all of this without losing their minds, and it’s rockstar.

Most recently, Angela’s been serving as the CEO of FareStart, a James Beard Award-winning nonprofit organization disrupting poverty and nourishing communities through food, life skills and job training. A long history of working in restaurants has certainly helped her to lead in this important new role, but it’s her caring nature and swift willingness to help others that’s made her such a fit in this role.

A Lifetime of Giving Back

Angela found her way to community organizing, fundraising and philanthropy as a young woman. Growing up in a small town in eastern Oregon, there weren’t many options for managing the reproductive health or family planning for young women—there wasn’t even really any sex education to speak of. Once in college as a political science and women's studies major, Angela had an “aha!” moment and saw an opportunity to make an impact.

“I certainly wouldn't have thought of it as philanthropy when I was 21,” says Angela, “but I gave what I could. And through that, I got civically involved as well.” Angela interned with Planned Parenthood and led a voter registration drive in 2004, which sparked the fires of civic political engagement within her and has driven much of her work in the last decade.

2011 marked a critical turning point in Angela’s life. She gave birth to twins who were stillborn as a result of a fetal disease called twin-to-twin transfusion syndrome (TTTS). “I just went to the darkest of dark places for a long time,” Angela says. “Years, actually. It took a long time to feel normal, and it's been almost 10 years, and there are still moments when it's just really, really difficult. It's a terrible club to be a part of.”

In that grief, the need to stay busy and create purpose in her life drove her to co-found Eat Run Hope, a 5K run/walk and food event in partnership with the Fetal Health Foundation, which raised hundreds of thousands of dollars.

“I don't know that there's any one way to handle grief,” says Angela in reflection of that time. “I just needed to create purpose, I just needed to be busy. I needed to have something to focus my time on, or I literally would not get out of bed. It was really important for me that people realize these were actual babies. I went through labor. They were people. Their names were Nathanael and Gabriel. I held them. It was really rewarding to be able to have something that could change the trajectory of someone's life, and I think that that speaks to what I do today, too.”

After more than a decade running Ethan Stowell restaurants, Angela was ready for a fresh start. She and Ethan were divorcing and it was just time to move on to something new. A long-time supporter of FareStart, in late 2018 she became their CEO. “I think that FareStart symbolizes a new beginning for so many people, and it’s been a new beginning for me as well,” says Angela.

“If there is one job that I think every person should have to have, it’s some sort of restaurant job,” Angela says. In restaurants, not only do people learn conflict management and multi-tasking skills, but for Angela, the focus on hospitality has a unique ability to restore some dignity for those who have been living unseen.

“At FareStart, one of the most important things that we do is empower people to have agency over themselves and to be successful,” says Angela. “The restaurant industry is a good place to do that. There's something really interpersonal and connected to the concept of hospitality that is really important in returning dignity and humanity to people's lives. Most people who are experiencing homelessness say, ‘People don't even look at me. People don't see me.’ By giving hospitality, they're able to both see other people and also be seen.”

Flash forward to 2020. COVID-19 has completely rocked the world around us, and the restaurant industry has been decimated, and FareStart has had to pivot their pathway to success. “We can't train folks to work in an industry that doesn't exist,” says Angela.

When the pandemic hit, Angela led FareStart as they shut down their catering, restaurants, and cafés and started funneling most of their resources into their long standing Community Meals program. Since March, they’ve made over 2 million emergency meals and have been able to hire nearly 40 of their graduates and place 100 graduates into jobs. Training has continued through virtual learning, with greater emphasis placed on preparing students for the grocery sector and other areas in the food system.

“Running 16 restaurants in my previous career and being part of a fast-paced world and open to constant change has definitely helped this year,” says Angela. “Being an entrepreneur and comfortable with taking risks has benefited my leadership.”

Taking the time to hit pause and take inventory of her gratitude has grounded Angela as she charts these uncertain waters. “Every night at dinner, we go around the table, and share something we’re grateful for. For an eight- and six-year-old, some nights it's the polenta for dinner or their best friend. Other nights it's that we can be together."

With the first few weeks of 2021 already in the books, Angela is staying present and hopeful for the future. “I'm very much looking forward to our first Black and South Asian female Vice President,” she says. “And a vaccine. I think that there's going to be a real desire for people to come back together and have human-to-human interaction when a vaccine is widely available. We have some hard months ahead—we're going to have to be really vigilant and come together as a community.

That's one thing that's really special about Seattle. We are a community that really comes together and rallies around each other. People in Seattle want to see change and they care. I think we're going to keep showing up like that in 2021.”

Follow Angela Dunleavy-Stowell on Fresh Chalk to stay up to date on her recommendations for the best products and professionals. Add your own recommendations to earn good karma and promote your favorite businesses and community super-heroes.

In our Real-Life Superheroes series, we interview Fresh Chalk members to learn how they've leveraged the skills of a team of pros to accomplish a goal or dream.
Check out some of the most popular series on the Fresh Chalk Blog.
At Fresh Chalk, we believe the best recommendations come from friends. Our mission is to help you find the best products and professionals for home, health, beauty, and more — through your personal network — as quickly as possible. Learn More
Join Fresh Chalk About Us
Share Article