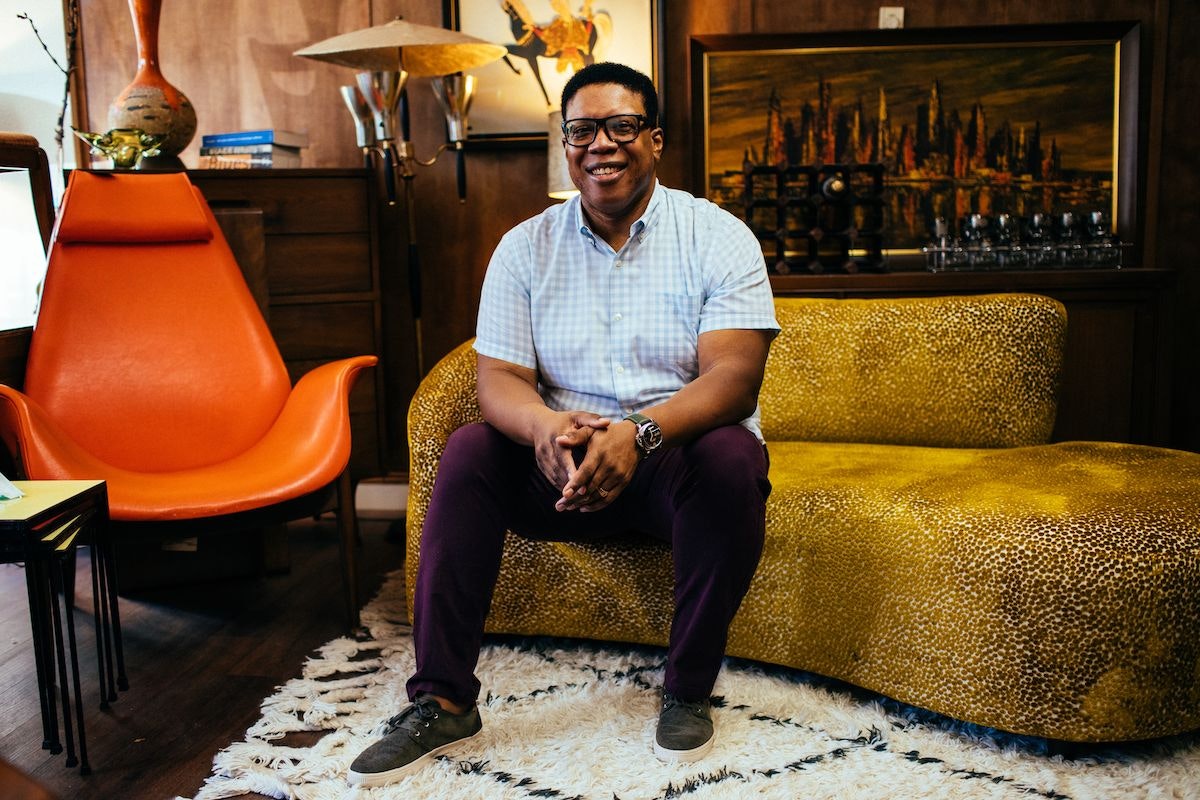 Few people can transform their hobbies into a business as naturally as Karl Hackett has. As the owner of Jacob Willard Home, a furniture store selling mid-century modern and vintage collectibles in Seattle’s Hillman City neighborhood, Karl’s journey to entrepreneurship started by accident. The business, born out of Karl’s passion for collecting, is now connecting Seattle-area residents with furniture and music from times past.

From Collector To Accidental Entrepreneur

Karl began collecting vintage furniture when he was in his 20s, thrifting for items just because he thought they looked cool. “I didn't know vintage from mid-century from Danish modern—I just bought what I liked,” he says of those early years. “I grew up in a mid-century house in Ohio and loved watching all the old movies from the '50s with Jerry Lewis and Dean Martin. I think I was unknowingly just drawn towards mid-century design.”

Eventually the collection outgrew the home Karl was living in with his wife and young son, Jacob. At one point, there was nowhere to sit down and Jacob was playing in the corridors between all the furniture. Something had to give, so Karl and his wife held a yard sale one day to see if anyone in the neighborhood would want to buy up some of this furniture. The sale was a big hit. “I think we had six yard sales that first summer,” Karl says. “After the first two, word spread throughout the neighborhood. People would come to the door at just random times and say, ‘Are you the furniture guy?’ and, ‘Can we come in and take a look around?’ It was really pretty amazing.”

The yard sales were a catalyst for something even bigger. After two summers selling items at home and on Craiglist, Karl took a chance and opened Jacob Willard Home in Hillman City. Karl named the business after his son, Jacob, whose middle name is Willard after Karl’s father. “The reason I named it after him is because it was my desire to build a legacy—something that, hopefully, would allow me to pass something onto him,” Karl says.

The transition to a physical location was difficult, but Karl and his talents grew in parallel with the business. “I never actually worked in retail,” he says “and so there was a huge learning curve. We had overhead now; we had to merchandise the space; we had to, effectively, find the clientele. We didn't have any money. We had furniture but we didn't have any money. There were some challenges that I did not foresee, but we've managed to survive.”

Soon after opening, Karl added refurbishing and upholstery services and spent the first two years hand-sanding every piece of furniture that came into the shop until he purchased an orbital sander. “It taught me a lot about the wood—how it works, how it responds and the tendencies that makers or manufacturers used to employ to get pieces done,” Karl says. “To be able to watch something transform under your hands is pretty gratifying.”

Bringing Together Music and Mid-Century Modern

As the owner of a self-proclaimed “modest collection” of over 2,000 records, Karl’s love of music is equally as evident as his passion for vintage furniture. While working in the store, Karl met the owner of Sick Tree Audio, a Seattle-area business creating custom turntables, speakers and tube amplifiers. The two business owners decided to enter a partnership, bringing Sick Tree Audio’s music equipment into Jacob Willard Home. “As our friendship grew we began to explore the possibility of a more overt arrangement where we would create a space to highlight the Sick Tree Audio gear. It was great. People loved it,” Karl says.

People were drawn to the sound and performance of the custom gear produced by Sick Tree Audio. However, the pandemic introduced unforeseen challenges to the business, forcing Jacob Willard Home to close for four months. As a result of the closure, the store had to pull the audio gear from the store and close the vintage record room.

Despite the difficulties of the last year, Karl remains optimistic that the music equipment will return to the store in the future. “The hope and expectation is that eventually, we’ll get back on track with both of those. But we’re still trying to proceed with an abundance of caution, given the circumstances and the proliferation of the virus,” Karl says.

Karl is no longer the only person in his family with a passion for mid-century modern design. Jacob, now almost ten years old, shares his father’s love of vintage furniture. “I used to say that when Jacob started school, he'd be the only kid in kindergarten who could tell you how to identify an authentic pearl from a fake,” Karl says. “He was with me through it all.”

Jacob already has a vision for the business named after him. He’s started to tell his father about the day when he and his cousin will take over Jacob Willard Home themselves. He even dreams of opening a second location in California. The business built from Karl’s hobby-turned-passion has created a Hackett family legacy that can connect generations to come.

"Custom cabinet and furniture maker owned and operated by Patrick Tomeny, a person whose integrity and professionalism is as impressive as the stunningly beautiful work he produces out of his local Hillman City/Brighton workshop. We have a long standing working relationship and friendship and I don't have the words to articulate the joy I get from working with Patrick."

"When my friend and Hillman City neighbor started a home staging business, I was all in with her. She'd already proven to be dependable and reliable in our dealings, and I knew she had great taste, based on pieces she'd purchased from our store. I've watched her business grow and how she's earned a reputation as a highly skilled, organized and thoughtful professional and I wholeheartedly recommend Lindsay's company to anyone looking for home staging services."