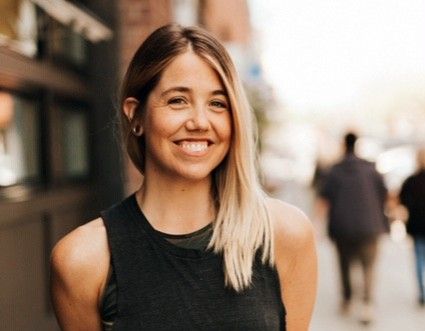 We love meeting local professionals with unusual and inspiring stories, and Seattlite Erika Ramberg fits both bills. By day, you can find her working on various event and marketing projects in the Capitol Hill offices of Substantial, a leading digital product studio that serves tech, non-profit, and arts clients. At other times, you’ll find her in a completely alternate mode: at the  front of a class full of yogis, leading them through a traditional practice. We wanted to learn more about the journey that led Erika to take a new career leap but maintain her longtime love of yoga.

Let’s talk about why and how you became a yoga instructor. What made you take the plunge? Who did you train with?

I moved to Berlin when I was 24 in search of freedom, techno, a place to feel creative and ultimately, for something that felt like meaning. Despite having a college degree and a strong background in academia, I found myself mostly working in coffee shops and bars and leading a pretty non-ambitious life. After a few months of some pretty heavy partying (and some pretty lonely times) in Berlin, I begrudgingly found my way to a yoga class. Yoga is good at putting you face to face with your limitations and frustrations. After that first class, yoga began to give me a ‘home’ and a sense of purpose. After about four years of almost daily practice, I took a leap of faith and flew to England for my first of many trainings - a 300 hour Jivamukti Yoga teacher certification.

What was your path in yoga like? Did you work at multiple studios? Do you specialize in a certain type of yoga?

I was very lucky to have found the Jivamukti Yoga school in Berlin. While the training isn’t cheap or easy, it’s incredibly comprehensive. I trained for over a year to become a teacher! We learned so much more than posture. There was a big emphasis on learning the philosophy, Sanskrit, and the spiritual underpinnings of the practice. The spiritual element helped me through some pretty tough times. Slowly, I was finding the sense of meaning I had been looking for.

I’ve been practicing for almost 12 years now. I still teach and love Jivamukti but my practice has evolved to include Ashtanga Yoga. I’m now 36, so I have also embraced slowing down and love to teach a methodical, challenging hatha class where everyone sweats through their shirts without any chaturangas!

I teach Jivamukti Yoga on Tuesday nights at Ritual House of Yoga and make frequent appearances teaching a slow sweaty strength-building vinyasa at The Sweatbox.

Did you experience any injuries or challenges as an instructor that you had to deal with?

Oh yes, injury is inevitable. Not because the practice is inherently injurious, but because we all bring old movement patterns, mental striving, and other karmas to the practice. In my early years I had low back pain a lot (I was actually too flexible and had to learn how to build strength to stabilize.)

Later, in pushing myself into lotus pose (among other poses my body wasn’t ready for) I ended up tearing both menisci in my knees. In the beginning, this felt like a yoga teacher death sentence, but years later I look back with immense gratitude to these injuries. Pain is a teacher. I learned so much about my own patterns (both psychological and physical) that were harmful and have developed a much deeper empathy to students with physical limitations. I also became much more interested in functional anatomy and moving safely rather than ‘deeply.’

When did you decide to make a chance and pursue a new career path?

About a year ago. I had been a full-time yoga teacher for almost 7 years, but when I taught my first retreat in Panama in 2018 my world opened up somehow. I started to get this itch to use my brain in new ways. It seemed pretty scary to do something other than yoga (I didn’t even know how to use PowerPoint at the time) but I also started to get curious about how the things I had learned in yoga could translate to other disciplines. Yoga means “union,” or to make connections between seemingly disparate things. I wanted to dig into that.

What has it been like to transition into the agency environment? What surprised you? What have you learned?

The first several months were exhausting and pretty humbling, but I’ve loved being part of a team for the first time in my professional life. I love all the brilliant people I have met and the incredible panels, events and conferences I have been able to attend.

Yoga is about learning to give all of your focus to one thing at a time and really absorb it. In my tech job I am multitasking constantly. I am challenged on a daily basis to try to give a project (or a person) my full attention.

I also am realizing how important it is for me to lead a career that fulfills my purpose here on earth. In yoga we call this “dharma.” When teaching yoga, your dharma is very clear. In agency life, you have to dig a little bit deeper to identify what your purpose might be on any given project.

Which people have been most instrumental in supporting you through these journeys?

I am very lucky to have met a few incredibly inspirational yoga teachers on my path. While it might sound cheesy, they affected me not so much by what they taught me, but how they lived their lives. I remember meeting a select few teachers who right away made me think, “I want to live like THAT!”

My advice would be in yoga (or any discipline) to keep searching for a teacher or mentor. Don’t settle. That mentor might not live in your city but, even a few hours in their presence will set you with inspiration for another year until you see them again. My teacher Maty Ezraty recently died at the age of 55. I’m still working through the loss, but every time I teach I notice myself sharing something that she gave to me.

What advice would you give people thinking about making a significant career change?

Ask people you admire out for coffee. Don’t be shy! They might be really busy people so there’s a good chance you’ll have to ask a few times. It was incredibly helpful for me (someone who didn’t have a clear picture of what my new future would look like) to hear the stories of brilliant people and how they got to where they are.

You’ll likely also walk away with some insights. Before switching careers I had coffee with a mentor who suggested when looking for a company to work for to focus less on the ‘what’ but on the ‘who.’ That made a lot of sense to me. Having taught yoga at Substantial for 3 years I thought immediately of all the wonderful people in the company I had taught. And now I work alongside them.

What's your favorite yoga studio? Recommend it on Fresh Chalk!